The love of a mother who doesn’t give up: “When I gave birth to Mădălina, 27 years ago, the doctors told me to leave her there and go home” • Fundația Vodafone România - e normal sa facem bine Skip to content

The love of a mother who doesn’t give up: “When I gave birth to Mădălina, 27 years ago, the doctors told me to leave her there and go home”

Home » Noutăți » The love of a mother who doesn’t give up: “When I gave birth to Mădălina, 27 years ago, the doctors told me to leave her there and go home” 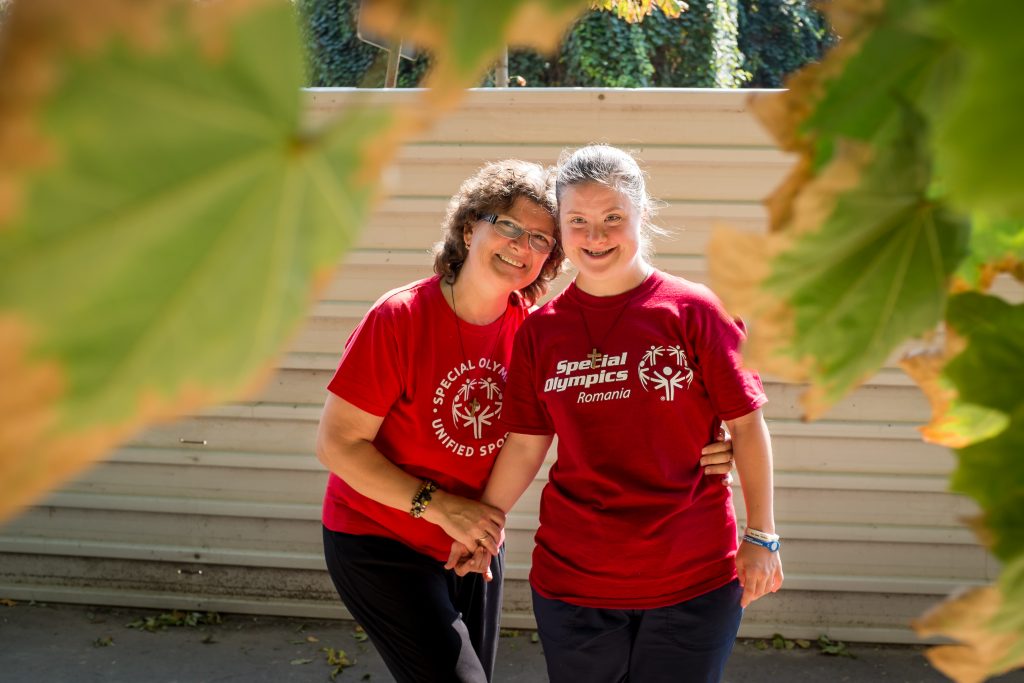 Told by her mother, Cristiana Marin

When I gave birth to Mădălina, 27 years ago, the doctors told me to leave her there and go home. I also have an older son and apparently there was no point in sacrificing him because I gave birth to a Down syndrome child. This made me mad, so I requested to be discharged and left the hospital.. She’s my angel, my cross. I also had my mother to support me. She passed away. Maybe, if it wasn’t for her, I would have been like other mothers and I would have seen things in a different way.

Mădă was reading pretty well 12 years ago, but she was missing syllables and the resource teacher told me that she wished to move forward, but was unable to, so I said that we should discover her other abilities. I asked what else she could do with a mental disability? After Mădă first fell in love with dancing and started attending the Special Olympics competitions, they also invited us in 2011 to a swimming competition, in Hunedoara. But we didn’t know how to swim. Mădă had been into the water at the seaside, but we didn’t have the chance to take her to a pool.

Where could we have found a pool to take her swimming, at least to see how it’s like? At Floreasca, the water was three meters deep. Those entering the pool were made to wear an inflatable belt and armbands. Those sitting on the side did nothing to allow them to get used to the water.

When she went into the pool, Mădă grabbed a little boy’s leg to pass him, he grabbed her neck and sunk her. I told myself that this was the end of swimming for her. Whenever something happens, we use to hold each other tight, until we feel that the fear and anxiety are gone, so this is what we did then, both with tears in our eyes. I was considering leaving with her, but after she calmed down and took off from my arms, she told me she wanted to go into the water. I supported her and I did my best to pay for her lessons, I found the pool at Lia Manoliu, which is closer to our home.

In Hunedoara, it was hard, I thought she won’t be able to do it, she was also a bit chubby, she wouldn’t be able to swim. They took off her belt, I don’t know how I came out of the tribune and jumped in. But she said she could swim without the belt.

Then, she was invited to all sports. Not to judo or boxing though, because Mădă is strong and cannot control her moves. This is how she understands, to throw people to the floor. If she hugs you, you feel your back straightening, yet this is a display of affection for her. She’s been into sports since she was 14 and she has never said “I can’t”, she has a healthy body that is rare for Down syndrome. Now, she has also managed to express herself through words, she no longer shuts down and this is also due to the Special Olympics, because all of these participations have guided me towards giving her more freedom and not pushing her. Everything came from her and, at night, she would ask me “where are we going tomorrow?”.

We were already attending swimming competitions and the people from the Special Olympics wanted to take her to the USA, for the World Games. I wanted her hard work to be acknowledged, but in order to get into an international competition in the US, you have to understand that swimming is not a game. There are rules, she could be disqualified and I would have preferred for her to skip this, rather than return disappointed. I said “Lord, give me a sign to come from her, for her to understand that she’s not going for a walk, and that she needs to do as told”. I told them to take her along to a national competition, because it’s one thing for her to be here, where I can come and pick her up, but abroad would be something else. She spent five days skiing, enough for me to see that she could be on her own and behave. This was the sign, if she wanted this, I’d say “yes”.

This is how Mădălina attended the Summer Special Olympics World Games in Los Angeles, in 2015. Her dream came true and her work of many years was valued. At 25, Mădă returned with a silver medal for the 25 meter backstroke competition, and the fact that she behaved and there were no problems is something great, for me and for the Special Olympics.

I was very nervous, as any parent would be. I discovered and she enjoyed. swimming. A lady came over to shoot a video with Mădă at the pool and it’s one thing to stay on the side, see how she doesn’t want to get  out, and another to see what she does in the water. When I saw the video, I said to myself that this was not her. Playing in the water, juggling, showing no fear, like being on the ground. Then, I said that indeed, swimming was in her blood, but I had not discovered it and I thank God that I did at last.

You must always support your child, develop his/her skills. If indeed, you see that he/she can’t do it, you stop, but you must discover him/her constantly and not wonder why he/she is not doing what the others do. They’re all different, even if they look alike, just like us. Not all of us end up being doctors or athletes. They just need more encouragement. That’s it. Why make her read, if she can’t? Maybe she wants to, but she can’t. Since she began swimming, she never had a cold. I would sometimes say that it’s raining and ask where we could go in such a weather? She would go into the Lia open pool, claim it was a bit cold, but then get used to it. The neighbors told me I was crazy, but she became immune. Through Mădă, we also became strong. She always managed to get up and move on.

Mădălina Marin discovered her passion for swimming with the help of the Special Olympics Foundation in Romania, supported financially by the Vodafone Romania Foundation.