Among the carpets, balls of thread and embroideries, the villagers of Corbeni remember the crafts from their elders and are learning to pass them on. 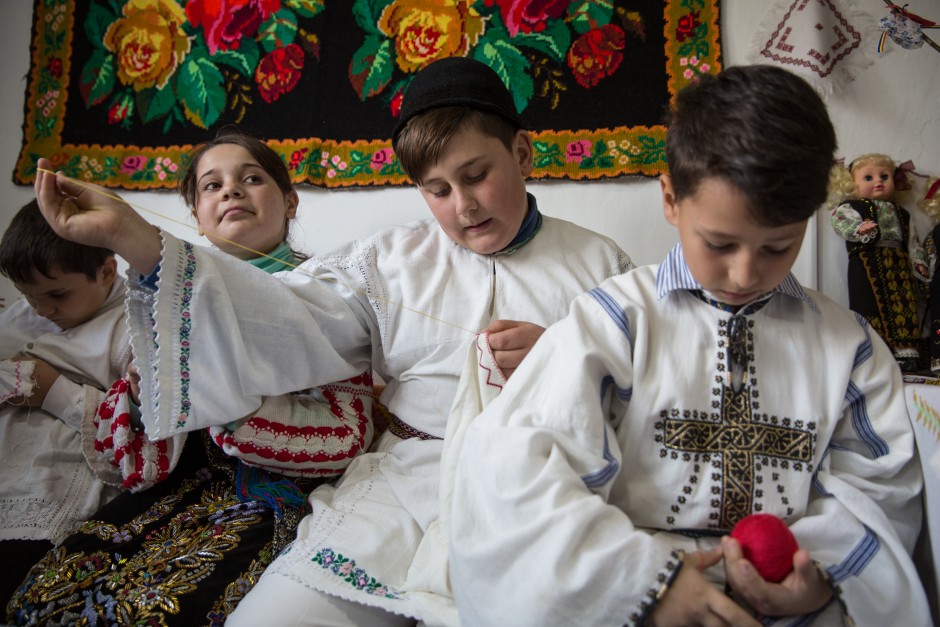 It’s cooler than outside in the crafts workshop from Corbeni, yet no one seems to care. Seven girls and four boys have spread around the small wooden benches and chairs in the room and are bent over pieces of etamine that they have just removed from their pencil box. They share a laugh, share some school related gossip and check on math sheets marked with Xs or photos on their phones on how to sew. On Palm Sunday, they are traveling to Pitești, at the Symphony of Tulips, so each of them is sewing red tulips and “Corbeni 2016” on their little piece of fabric.
Everything around is handiness. Decades old costumes and floral embroideries on etamine are displayed on the white walls. One table holds loom rugs, bags, a wooden cradle swinging dolls the size of a palm, dressed in traditional clothes. Some are brought from the villagers from their own homes or are made by them, others come from the hands of the children or those of Marilena Iosifaru, a traditional craftswoman aged 67, who’s the heart of the community. Several years ago, the Traditional School of Arts and Crafts in Pitești has opened in Corbeni a crafts unit, where Marilena is passing on some of her lifelong knowledge. For the past months, since the Association Corbeni Plai Argeșean was granted funding from the FoundationsPACT and Vodafone Romania, Marilena’s classes are held in a more spacious, light filled and properly equipped room, compared to the one where she previously worked. The village now has a crafts workshop, where other activities can be performed, besides from those involving children.

Marilena, a tall, well-built woman, with a scarf on her head and the smile of a naughty child, learned the craft from her mother and aunt. She wore a traditional costume when she was a teenager and lived in a time when people would work one year for a traditional shirt, and then, as people abandoned traditional clothing, she was left with a closet full of traditional shirts, aprons and fabrics. Even after she had a child, she continued to work sometimes. She had a subscription to the magazine Săteanca and used to make for her two daughters whatever she found new in fashion. Embroidered tablecloths and towels, baby shoes, dolls, rugs, bed covers, such numerous items have been made with her own hands since she can remember. “I always liked this, I need to work on something,” she says. “Even if I’m digging in my garden and take a 30 minute break, I rest on two pillows and I do something with my hands. This is a habit I picked up as a child and I don’t find it difficult, I am too restless to do nothing.” Now that the trend of traditional shirts is back, she gets orders from several places, but doesn’t have enough time for them: her husband is ill, she has a garden and animals to take care of and a begining of a glaucoma that limits here enthusiasm. “I love working, I’d work all the time.”

About 10 years ago, one of her nieces went abroad for an exchange of experience and Marilena dressed several dolls in traditional costumes, put Romanian flags on them and gave them to her niece, as gifts for the hosts. The works were seen by one of the county’s museum managers and she was proposed an exam – a few displayed handmade items were enough for her to receive her certificate as traditional craftswoman. A while later, upon the initiative of the manager of the Traditional School in Pitești, the traditional crafts unit was opened in Corbeni. Children rushed to get registered, over 30 of them during the first year, then the number was brought down to 15, but they were too many as it was. The room where the classes were held had an old stove and an old loom which could no longer keep up. Other items could not fit inside the room anylonger.

The Association Corbeni Plai Argeșean was founded at the initiative of Maria Martinescu, a former French teacher from another village in Argeș, whom, after retirement, returned to her native Corbeni. Having worked in an association from Vrănești, she gathered some of her reliable acquaintances, including the commune priest, singer, an educator,Marilena and her daughters, and, two years ago, they created an initiative group. At the time, they did not fully realize the implications related to founding an association, yet they believed in their mission to transform their community, to revitalize the commune and capitalize on its potential. They began in 2014, with the rehabilitation of a well, they continued with an advocacy campaign for building a play space and, last year, they were granted the funding that allowed them to create the arts workshop that Marilena Iosifaru was dreaming of. Their project proposed to bring back local crafts into the community’s life, in order to prevent the loss of connection with the past, by arranging a space provided by the Corbeni Commune Hall and creating activities having it as its core.

Next to the four group kindergarten attended by children from six villages, there is an old Commune Hall building, which has had several uses throughout the years, until being left abandoned. One of its rooms hosted Marilena’s classes until last summer. There, in a nearby room, almost double in size, used as commune school storage space, the workshop was opened.

After the school took away the desks and objects which were being stored there, the walls were leveled, the floors were fixed, the doors were changed, the lighting was changed and the room received a fireplace, two new looms and a sewing machine.

Marilena’s classes were resumed last fall, two hours each Wednesday and Thursday, with the children from the elementary and middle school from Corbeni, but also available for high school students. The opening of the workshop was performed on December 6 and announced in church, on Facebook and through posters around the village.
As there were no activities for adults at the time, and the room was already being heated for the children, the members of the association decided to organize social soirees on Wednesday and Thursday evenings. All throughout the winter, even people sometimes coming from neighboring villages, gathered to prepare work fabrics for rugs, to work or teach other. “I have cut piles of rags and made thread balls…” says Daniela Mărgărita, an educator in Corbeni and the secretary of the association. Among the participants were retired women, mothers of infants, sewing aficionados, but also people who had not tried this before, people who wanted to remember how to work and others who just wanted to socialize. The joyful discussions ended after 9 PM. One night, they stayed almost until 11 PM.
“First of all, we gathered the people close to us,” says Daniela, who called for help or to attend the social soirees her sister in law, sister, and mother. Daniela is 53 years old and was involved in the coordination of the project. She grew up in a village near Curtea de Argeș and moved to Corbeni in 1981, when she was assigned here as an educator. She immediately fell in love with the commune – she had sworn not to live in a plain, as she cannot stand the heat and the seemingly endless land – and she never left. As many other women from the village, last summer, she taught others how to sew for the first time.

Marilena claims that once in the workshop, children have the tendency to try out everything, yet they usually stop at etamine, because it can be continued at home. In her class, she has two girls in the 8th grade, who got traditional shirts to work on, she also has a little boy in 7th grade who switches from looming to sewing and viceversa and is good at everything. She also has something that could not have been seen 10 years ago: girls asking each other where they could get traditional scarfs or shoes. The workshop is about them and for them, but it can become so much more.

In the future, Daniela says, they would like to find a formula for selling the products made in the workshop – they have already been contacted by potential customers. They’d like the workshop to be also open during the summer, for a few hours every day or several days a week – maybe people from the village can come and work, or tourists from the bed and breakfasts in the area could learn how to make the things they usually find in fairs or their grandparents’ households. Marilena’s dream could blossom in many ways, just as the tulips embroidered with red thread by the children.

This material was drafted in a partnership with Decât o Revistă, within the founding round Involved in my community, conducted by the Foundation Vodafone Romania and the PACT Foundation. You can find more stories on involvement on the platform oameniisudului.com, developed by the PACT Foundation.