4.5 million lei will be granted for the modernization of six neonatology wards from the Life for Newborns Fund • Fundația Vodafone România - e normal sa facem bine Skip to content

4.5 million lei will be granted for the modernization of six neonatology wards from the Life for Newborns Fund

Home » Uncategorized » 4.5 million lei will be granted for the modernization of six neonatology wards from the Life for Newborns Fund 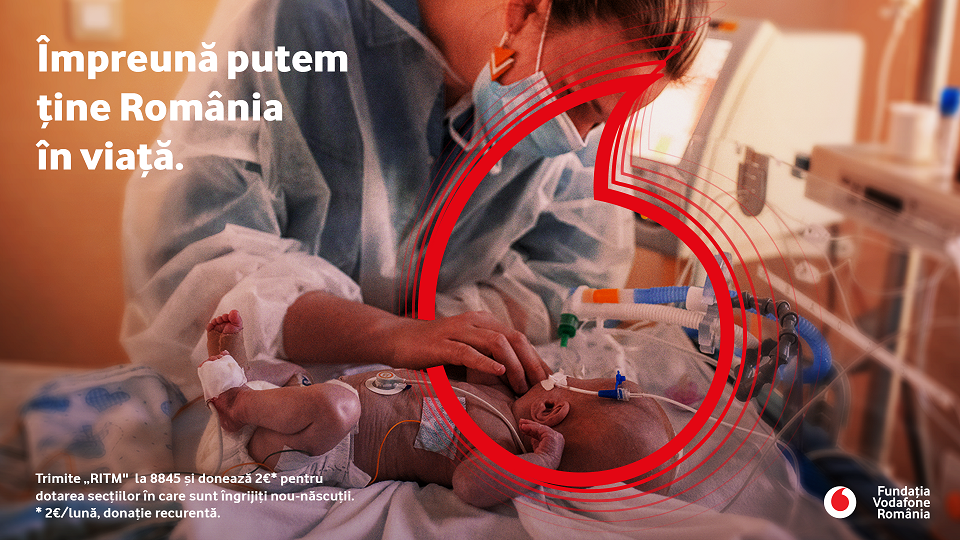 Bucharest, October 29, 2021 – Vodafone Romania Foundation announces the winners of “The Life for Newborns Fund” financing round, worth 4.5 million lei, for the renovation, modernization and supply of medical equipment, including telemedicine solutions, for level I and II neonatology departments and wards in public hospitals across Romania, as well as for the training of medical teams. The six beneficiary neonatal units belong to county and municipal hospitals in the cities of Botoșani, Caransebeș, Craiova, Mediaș, Slatina and Târgu Mureș. The project implementation will be handled by foundations and associations experienced in the field of medical project management, which, along with financing, will also benefit from technical consultancy for renovation works and consultancy for attracting funds destined for the long-term development of neonatal medical units from disadvantaged communities, provided by Vodafone Romania Foundation.

The winning projects are:

“When we speak of medical interventions in the case of a newborn, the level of endowment with medical equipment of a neonatology ward can be the difference between life and death. We trust that these projects will contribute to offer severely ill babies in Romania a chance to survive. We estimate that after the conclusion of the projects, 11,000 newborns, among which 2,000 suffering from critical medical conditions, will benefit every year from the best care or optimal transfer conditions to neonatal intensive care and high-level premature wards and departments. Every year, 200 doctors and nurses will have proper medical conditions to care for newborns with various medical conditions. We thus contribute to fight a grim statistic, with Romania having the highest infant mortality rate in Europe” declared Angela Galeța, Manager of Vodafone Romania Foundation.

To extend the modernization process to as many neonatal medical units in Romania, where needs are complex and urgent, Vodafone Romania Foundation, together with partner NGOs, is running a public fundraising campaign. This initiative is aimed at both citizens and companies, which can donate through various mechanisms (2 euro/month donated by sending an SMS with the text RITM at 8845, redirecting 3.5% of the income tax or 20% of the tax on profits, as well as through an online donation in the project account).

So far, the Vodafone Romania Foundation has invested 16 million lei in the construction and then in the extension of the Neonatal Intensive Care Unit of the „Marie Sklodowska Curie” Hospital in Bucharest and in the modernization of the Neonatal Intensive Care Department within the Constanța County Emergency Clinical Hospital „Sf. Andrei”. Both departments were equipped with state-of-the-art medical equipment, including two telemedicine solutions for remote monitoring of patients, secure real-life transmission of images and medical parameters and videoconferencing.

The Vodafone Romania Foundation is a Romanian nongovernmental charitable organisation, established in 1998, which operates separately and independently from the company’s business. In over 20 years of activity, Vodafone Romania Foundation has funded 1,168 programs conducted by 745 non-governmental organizations across the country, in the health, education, social services industry. The projects had over 3 million beneficiaries – children, young people, elderly, physically, socially or economically disadvantaged people. So far, Vodafone Romania Foundation invested EUR 31 million in projects conducted by partner non-profit organizations. More details about the Foundation’s programs are available at www.fundatia-vodafone.ro, http://jurnaldebine.fundatia-vodafone.ro/ and www.facebook.com/fundatiavodafone.