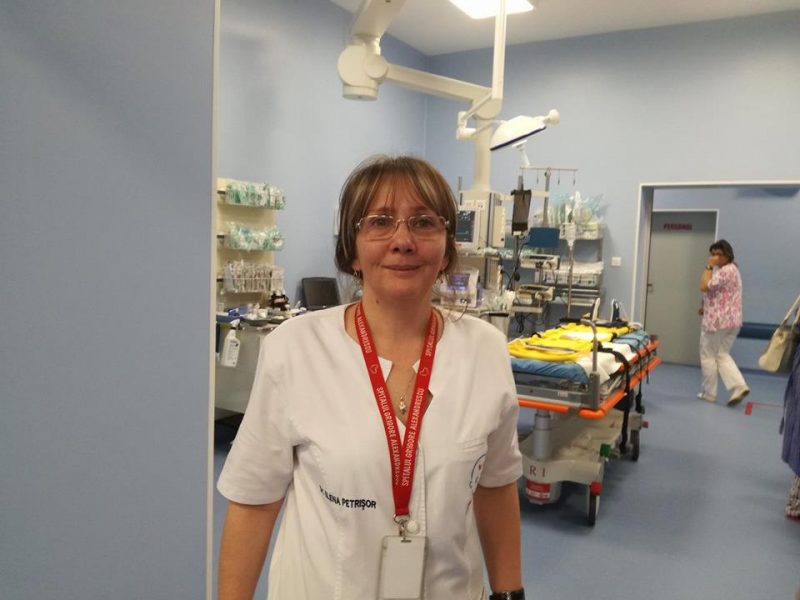 Back then, the Emergency Unit at the Grigore Alexandrescu Childrens’ Hospital was comprised of three small old rooms, six doctors, nine nurses and six caregivers. Elena Petrisor, chief of the Emergency Unit, remembers: “They were very crowded, much too crowded for the high number of suffering children who would arrive there daily.

Meanwhile, things have changed in the unit which has been modernized and painted in a light blue colour, to soothe the young patients.

“The Vodafone Romania Foundation provided us with everything from stretchers, which may seem simple, but in fact are absolutely mandatory, to ventilators and monitors. We now have the ability to monitor each patient. This is very important. All monitors in the unit are organized as a central station so that the shift coordinator and the members of the team can monitor all patients from the entire unit, although it is a large area to cover. We have the resuscitation table for the newborns and we use it on a daily basis. They sent us four ventilators to ventilate the newborns weighing just 1 kg. They also sent us equipment to immobilize trauma patients, spine stretchers, shovel stretchers, and splints. They sent many supplies we can use in the emergency unit: laryngoscopes, mechanical ventilation bags, and now we will also get a defibrillator”, says Elena Petrisor.

58.000 Children Treated since the Beginning of the Year

At the beginning of September 2015, the newly furnished unit was inaugurated as part of the project carried out by the Vodafone Romania Foundation in collaboration with the SMURD Foundation. Since then, the Grigore Alexandrescu Emergency Unit has received 75.000 children, out of which 58.000 since the beginning of this year.

The youngest patient to reach the Emergency Unit was a two hour old newborn suffering from a digestive malformation and who underwent a surgery at this hospital and is now back at home. The oldest patient? A 93-year old who suffered an angina stroke in front of the hospital and who required emergency treatment.

Every day, the emergency unit comprised of 17 doctors and 35 nurses receives over 200 children, many of which are then sent to the other hospital units. “Some come here with minor emergencies, like colds, tick bites, abdominal pain, but there are also severe cases. Let us not forget that we are the only paediatric hospital in Romania with a burns unit and we treat severely burned children from all over the country, both airborne and land-borne. Every day, one or two children suffering from severe burns are referred to the Grigore Alexandrescu Hospital. Moreover, we also receive cases of severe poisoning, as we are the only paediatric hospital in the country with a Toxicology Intensive Care unit”, says Elena Petrisor. This is where the newborns burned in the Giulesti Maternity fire were saved. And this is where eight of the Colectiv victims were treated. “They are all alive today”, says Elena Petrisor.

„It is difficult to handle the aggression of those who come here and do not understand the triage codes in place.”

Elena Petrisor is grateful for the 14 years she spent at Grigore Alexandrescu. “I thank God for who I am. As time went by, we became a family, we all love children. They get under your skin and if you think you can pull them away, you’re wrong. Although they’re sick, they always find a way to cheer you up, to make you happy. They’re lovable, and their smiles are the most precious things”, says the doctor.

But what she would like to change is the way people understand the concept of emergency. “It is hard to cope with how aggressive people coming here are, and how they cannot understand that there are triage codes in place. An infant with a 40 degree temperature is a real emergency, while an older child who has been coughing for a week can wait. Why is the infant treated first? Because this infant with a 40 degree temperature can start convulsing any minute. I wish we could make people understand that we work in an emergency system and we prioritize cases. A child with phimosis who was brought to the Emergency Unit at 3 am, as it happened, is not considered an emergency”, explains the doctor.

There are two things she expects from her team members: “I am a demanding person, but I am not asking for much: only professionalism and love for children. Without any love for children, one cannot perform this type of activity”.

PrevArticolul precedentHere is what happened to the 150 poor children when an afterschool was established in their village. “They simply bloomed.”
Articolul următorFinancingNext