THE MILL THAT BRINGS PEOPLE TOGETHER 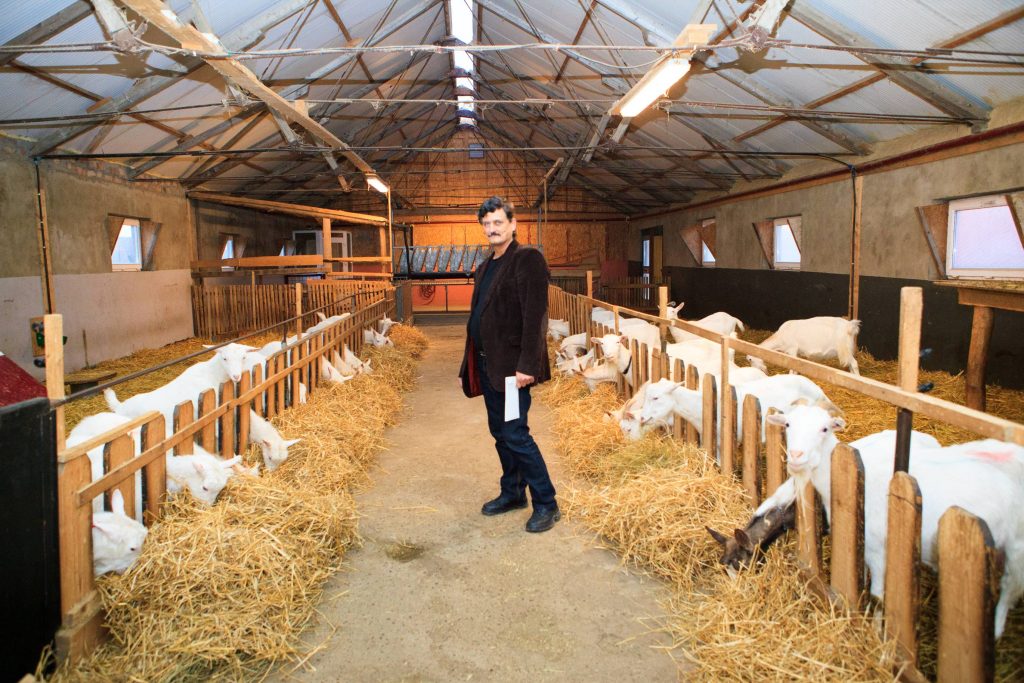 The whitest goats in Romania are those from Găgeşti, in a former agricultural production cooperative (CAP) which was converted into a fairytale land for 12 young people with disabilities. Thirty-five little S’aanen goats, the most productive milk-givers, live along with pigs, rabbits, chickens, geese, hens and fowls on the a mill farm and are looked after by the 12 young people, who have learned how to become independent and to care after themselves.

Butnaru Costel, a talkative and energetic 24-year old man, lives on the farm together with six other young men and women. Each has his or her own tasks to accomplish. Costel likes to take care of the pigs in the pigsties behind the mill. He named them, talks to them and makes sure they have enough food and water. He also cleans up the pigsty very thoroughly, because the cleanliness competition with the impeccable goats shed seems to be fierce at the farm. Costel grew up in an orphanage and then in a foster care center. As a teenager, he was enrolled in the deinstitutionalization program run by “Hello, children of Romania” (BZCR) Association. Since then, his life has changed a lot, from learning a trade to having his own room, where he keeps his mind busy thinking about how to expand the farm. But the most important change in his life was that someone trusted him and gave him a chance to manage on his own.

All residents on the farm suffer from a first or a second degree disability, meaning they are normally considered to be incapable of looking after themselves. Because they are orphans, institutionalizing them was thought to be the best the Romanian state could do for these people. But the BZCR people have always believed quite the contrary. The efforts of BZCR to deinstitutionalize these young people, that is to take them out of the foster centers and provide them with a home to live in,  helping them get a job fit to their abilities and treat them as equal members of the community, began in 2002. The goat farm, opened in November 2013 with financial and technical assistance provided by several Dutch organizations, is only one of the many examples of how the Association helps people with disabilities.

The farm was built to Western standards and is equipped with automated milking equipment and authorized milk processing facilities. The farm started with 11 goats. Now there are 35 goats and the “farmers” plan to raise the number to 50 next year, as Eleodor Gheorghian, a meek guy with a cowboy-like moustache, says. The plan is for the farm to produce enough goods to sustain itself in the long-term. Each Ron is carefully planned. A constant expense is the goat feed, a mixture of various types of animal feeds, which goats need in order to give plenty of milk. Initially, the farm people bought the feed from abroad, at 1.82 euros a kilo. In 2015, with the help of the Vodafone Romania Foundation, the farm bought a feed and corn mill which enabled them to prepare their own feed mix and decrease the feeding cost to only 0.64 euros a kilo. This means a higher income and the chance for the farm to become a steady business that will continue to help other de-institutionalized adults. Because some of the 12 individuals who came to live on the farm in 2013 have already become independent and have left the farm to live on their own.

Gheorghiţă Vlad, 31, is one of the five people who moved to a house in the village Giurcani, a few kilometers far from the farm. He commutes by bike, daily, coming to the farm in the morning and going back home in the evening. And he is not the only one who comes to the farm. Since the farm bought the mill, the villagers, who once travelled a long distance to grind their animal feed, now, come to this farm mill. They pay in kind for the service: they give one in every ten buckets of ground feed to the nice, little goats.

The farm and the village now live closer together as one community. And that was the plan right from the start!