FOR US, HAVING A HOME OF OUR OWN MEANS EVERYTHING, IT MEANS A BETTER FUTURE FOR OUR CHILDREN • Fundația Vodafone România - e normal sa facem bine Skip to content

FOR US, HAVING A HOME OF OUR OWN MEANS EVERYTHING, IT MEANS A BETTER FUTURE FOR OUR CHILDREN

Home » Noutăți » FOR US, HAVING A HOME OF OUR OWN MEANS EVERYTHING, IT MEANS A BETTER FUTURE FOR OUR CHILDREN 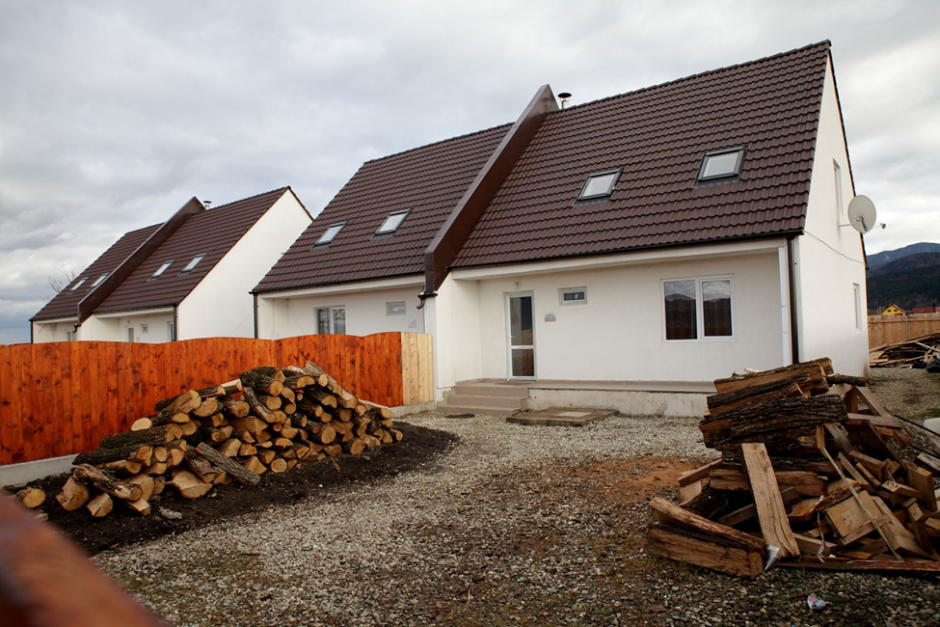 We drive from Pârâul Rece to Cristian, where we’ll pay a visit to each of the four families living in the houses built last summer as part of the project Built 4 tomorrow. It feels like an early spring day. Luckily the trees covered with silvery frost and the Piatra Craiului Mountain resting comfortably under a thick layer of immaculate snow, remind us that it is the middle of January.

We reach Cristian, coming from Ghimbav. The houses are ready to greet the guests, neatly surrounded by a wooden fence.

We enter the first gate while Dragoş is fixing something in the backyard. He, Mariana and the three children moved in from their former home, a modest dwelling situated in the court of a workshop.

Andrei greets us with a playful smile, one he manages to retain during our entire visit. He is seven and  has recently won the third place at the national ski jumping contest. Wood is burning in the stove placed in the lobby and the entire house feels warm and comfortable.

Emanuel, which is four and the youngest, takes refuge on the couch in the kitchen and perhaps intimidated by our presence, seems to ignore us completely, although we can sense he is watching us closely.

Sara is nine and takes the role of the oldest sister very serious, trying to train her younger brothers: now collect your toys, now we clean the room. She tells us how she helped her mother prepare the cake we are served, „I am the only one mother lets in the kitchen,” she says, imbued with a sense of purpose, „because I am the only one who knows how to beat egg whites”.

We go upstairs where the children’s bedrooms are, and on the way, snatch a glimpse at the bathroom. This is the one used by the small ones and has a tub, unlike the one with a shower from downstairs.

“Which one is your room?”, we ask the boys. “This one”, says Andrei, “can’t you see, it’s written on the door”. We are amused by the way they have marked their territory.

The boy’s room is a place for study… but mainly, for playing, really. While Andrei tries to do some of  his homework, Manu, as the family pampers him, is extreamly busy trying to catapult a car with a pencil…

Andrei tries to stop him and, before we know it, we find ourselves bystanders in a pillow fight.

But things cool down pretty quick and the two, like genuine little men, return to their toy cars.

In her room, Sara is reading a book she has borrowed from the library. She is attending a school where the lessons are taught in German and she likes it very much.

„And the Guitar”?, someone asks, noticing the guitar behind the little desk. „Do you play the guitar?”

„I learned to, for a while, but the teacher went to England,” she answers. And then highlights, to make sure we understand: „She left for good!”

Sara is thrilled to finally have a room all to herself, because she likes to keep her things in order and she also likes to read without being interrupted.

Her room is filled with teddy bears. A couple of big ones are sitting next to the bed while three smaller teddies are spread on the floor. In a gesture of magnanimity, Sara accepts the two younger brothers in her room for a bear cuddle.

We watch them play and are overwhelmed  by their joy. Then we decide to move on.

We say our good byes and head towards the second house.

Katalina, Daniel and their two sons live here. You can read more about this family on the blog.

Vlăduţ, who is eight, watches us from the top of the stairs.

His brother, Dumitru, is 12. They are both very quiet and detained. Daniel explains this is how they grew up. In the tiny room they used to live in until recently, they had to be quiet. They were not allowed to make any noise. The neighbors, who were displeased by the presence of the children, would use any pretext to complain.

The mood changes radically when Piţi makes its entrance. Piţi is a kitten that the boys rescued while it was falling off a roof. They caught it in a hat, and now it is everybody’s sweetheart. This people who were given a home, have in return provided a home for the little cat.

For now, the boys share a room. It will be a while until Daniel and Katalina will manage to buy furniture for the second bedroom.

Dumitru is very proud when he shows us the cup he won at a local fishing contest: „I caught six Prussian  carps and one carp fish,” he says.

„We are all fishermen,” laughs Daniel. „On weekends, we take the children and go camping and fishing on the waterfront. We like to spend time outdoors”.

„We are very happy here, but we are simple people and do not know how to express this in words,” Katalina apologizes.

We would love to play some more with Piţi (although she doesn’t seem to be thrilled by our presence), but we know we have two more visits to pay.

The four of them pose in front of the entrance. A woolly dog hurries from the backyard and joins the group. Now the family picture is complete!

Alexandru or Saşa, as everybody calls him, opens the gate for us. He lives with his wife Loredana and their three children in the next house.

We enter the central hall. “Russian sauna”, says someone looking at the burning wood in the fireplace and Saşa smiles.

Saşa was born in the Republic of Moldavia, but he behaves like a Japanese. He talks calmly and is extremely polite.

Daniel (nine) and Matei (six) share one of the bedrooms upstairs. Matei is very conscious of the fact the he is the youngest in the family. „Six years old but acts like a baby”, explains Saşa slightly embarrassed, though, of course, has nothing to be embarrassed about.

Lidia (10), looks like Pipi Longstocking, with the hair she has braided herself. She wants to become an architect, because, she explains, she likes math and she likes to draw. The refrigerator door exhibits some of her drawings and Loredana says her daughter is a very good pupil, always getting praised in school.

Lydia’s room hosts an electronic organ. A gift from someone. You can see it is not new and the power cable needs some fixing. „Mother knows what to do so that I can play it,” says Lidia.

Loredana’s skilled hands arrange the electric cable and Lydia can now demonstrate what she has been taught in the piano class.

In Lydia’s room, the three children embrace with ease for one last photograph.

They walk us to the gate; we pass through the front yard which in our imagination we already picture full of flowers. And we say goodbye.

We reach the last of the four houses built last summer by the 400 Vodafone volunteers. Only Anca answers the door, because Dorin, her husband, is working in Germany.

This is a house full of toys.

Raul, who is four, smiles at us from the couch, but is stingy with words.

“He doesn’t behave”, Anca tells us. Until recently the family lived in a small room improvised in a former barn in the courtyard of Dorin’s parents. They didn’t have a bathroom and the room was wet and cold. If she tried to scold the boy, the many family members would intervene and so, her authority was constantly undermined. Now she has to rebuild her relationship with Raul.

There is a sound coming from one of the bedrooms, Miruna is up.

She is two years and two months old and investigates us carefully.

We enter another room filled with toys, but somehow our camera doesn’t make Miruna feel comfortable.

We return to the kitchen were the little ones take shelter in the arms of their mother. We realize they are very young and probably confused by our presence in the house, so we are preparing to leave.

“For us, having a home of our own means everything, a better future for our children”, says Anca.

We say goodbye with the promise to return when the weather gets warmer.

It is silent in the car that drives up to Predeal through Pârâul Rece. We think of all the steps that had to be taken for these four families to enjoy a decent existence. The cooperation with our partners from Asociaţia Diaconia Ajutor Internaţional Braşov, the assistance of the social workers who have filled in the questionnaires, all the approvals that have been obtained, and last, but not least, the dedicated implication of the 400 Vodafone volunteers who helped build the houses. We think of the ten children we just met and we know that every drop of this collective effort was worth it. For them, the world changed overnight. It opened its arms wide and surrounded them protectively.