Condelina Kilikidis: Orphans are the project of my life Skip to content

Home » Condelina Kilikidis: Orphans are the project of my life

The story of Condelina Kilikidis and how she entered the world of humanitarian actions begins in 1990, right after the Revolution, when she got a job with General Secretariat of the Government, which at the time was developing a new institution: the State Secretariat for Handicapped People. She specifically wanted to work in a central public institution, because she was forbidden to do so by the communists, who wrote her and her family up, on account of being foreigners established in Romania. 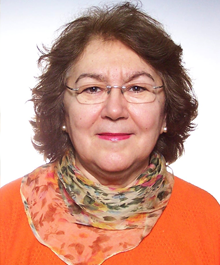 The institution where Condelina Kilikidis was going to work was founded in an extremely sad context for our country: there were 100.000 institutionalized and abandoned children in Romania, living in orphanages in unimaginably poor conditions.

“What I saw in the neuropsychiatric hospitals in Romania at the time deeply affected me. I am sensitive by nature and I immediately decided to stay with that institution, without ever trying to change fields”, Condelina Kilikidis told us. “It wasn’t easy, I had to visit those institutions, witness the horrors, recognize them. It’s terrible if you’re tender-hearted. It takes a toll on your personal life, their pain becomes real to you.”

There were very hard times for the abandoned children in Romania. According to a 1996 New York Times article, it was estimated that Romanian orphans got about five-six minutes of human interaction a day, and one out of 10 children ended up in a psychiatric institution, even though they had been born healthy. In the ‘90s the European Commission approved several PHARE-type programs for humanitarian aid. To begin with, help was delivered in the form of food and clothing for institutionalized children in Romania.

“At first everything gate-crashed, there was a flow of NGOs and people who wanted to help, but it wasn’t easy to turn the situation around all at once”, said Condelina Kilikidis.

For three years, Condelina Kilikidis worked with the European Comission, as a Government delegate in charge of managing the funds which were designated to help institutionalized children. Being an economist she saw to all the bills – of which were thousands every month. “The children’s life was starting to improve, they had heat, clothes, canned food, powdered milk. It was a raw first phase”, Condelina Kilikidis remembers.

In Romania there still are more than 250 institutions, holding over 10.000 abandoned children, according to HHC Romania, an association fighting for the disbandment of these centres. “Present conditions are infinitely better than they used to be”, believes Condelina Kilikidis.

“First of all, the buildings were outside the city, most of them in isolated areas, which is why the personnel looking after the children were uneducated; they were brutalized by the living conditions there. A child was just a random living thing. It was horrifying. Besides not being educated, the personnel were short on people. They physically couldn’t handle the situation. There were hundreds of children in one orphanage.”

Condelina Kilikidis remembered that during those years she was impressed by a project developed by an Anglican priest at Cernavoda, a centre for terminally ill children.
“He set up a building there, with a chapel and parlours, where children were taken care of in conditions we nowadays call normal, but which were extraordinary back then. They had a few months left to live. He had hired personnel and trained them, and the children were held and comforted all the time. The personnel were made out of volunteers, young women from England who had completed studies in that line of work. In England there are laws which don’t allow you to get hired unless you perform six months of voluntary work where it is needed, in a troubled country, like Romania was during those times.
Unlike this place, when I was in Craiova, at an AIDS ward with terminally-ill children, the walls were scorching off, and the children were kept facing up and couldn’t see a thing. This was in 1995”.

How Condelina Kilikidis came to work with the Vodafone Romania Foundation

In April 1997, Mobifon was launching the Connex brand which would be bought by the British group Vodafone. Charles Sirois was the head of the investment. Before establishing the business strategy, he told the prime-minister, Victor Ciorbea at the time, that his wife wishes to develop humanitarian projects in Romania, especially to help orphans. Condelina Kilikidis was designated by the Government to collaborate with the Foundation the business man’s wife was going to set up, being well aware of the situation in the institutions around the country.

Meanwhile, as a Government representative, along with Cristian Tăbăcaru, who was State Secretary for Child Protection during 1997 and 2000, Condelina Kilikidis continued to perform inspections around the country, in order to revise the wretched conditions to which institutionalized children were confined. She remembers a terrible instance from back then, from a neuropsychiatric hospital in Vânju Mare, near Turnu Severin. “What I saw there was something like a concentration camp! The shredded mattresses, barefoot children in rags, they were all wobbly and had this deranged look on their faces, they were kept together with the adults, they didn’t have heating during the winter”.

In partnership with the Foundation set up by Connex, Condelina Kilikidis especially intervened at nurseries, an example being the furbishing and equipping of a Maternal Centre at the 3rd Nursery from Giulesti, where there were approximately 100 children. Another special project was the support provided by the Foundation for the Centre for suicide attempt prevention in children and teenagers, within the Obregia Hospital, through acquiring psychological tests from USA, absolutely necessary for identifying children with suicidal tendencies.

When Vodafone bought out Connex, she was contacted and was offered to continue the collaboration.

The most cherished project developed by the Vodafone Foundation

“I am particularly concerned with the change in mentality and education. There’s no point in throwing around money, because it will only be wasted if we don’t change the people, and Voluntar de Profesie does just that”, she says.

She was touched by painter Dan Brad and his project, through which he teaches blind children to paint. “I was impressed with Dan Brad. I think we should encourage experience exchanges as well. For instance, we should facilitate contact between schools. There are other institutions across the country, there should be an information exchange, so that such a unique experience wouldn’t be confined to a local level. If I were in the Government right now… ah!”

PrevArticolul precedentWhy it’s important to have a school in the hospital
Articolul următorMotivation Vodafone, a most exceptional swimming competitionNext